A downloadable Videogame for Windows

Somewhere in the deepest reaches of space...

An execution is to be carried out...

Play as Orange, a perfect simulacrum of the Orange Experience. Be freed from prison by a strange hero.

SHRINESPARK is made wholly by one person! Experience the world as seen by "The Homie's Boon"...

TOO MUCH juiced-up original pixel art to gaze at on your quest! Art critics across the globe have been left FOETID CORPSES by the sight!

STUPID quantities of head-tapping original audio will have you too shakin' to play! It should be ILLEGAL to put this many tunes in a game!

Message me to request a community copy code

Great game, I liked it a lot. Music, art, humor, this game has it all. I did notice some bugs, though. The first time I beat the Intelligence Core, the party somehow got right up against the cage in the center of the room which caused the game to freeze instead of going into a cutscene. Also, the Brand status effect that prevents healing lasts for an extra turn after the icon disappears.

Cool game. Unfortunately, right before the boss fight with the engineer when you drop out of the pipes, the escape key stops working so it's impossible to save. I made it all the way to the place in the sky where you dodge bullets and lasers when I died and had to go all the way back. Will have to call it there :/

this is apparently a more common problem than I thought... fuckkk

can you tell me exactly what you did before the boss fight when escape stopped working? I have been unable to replicate this bug

I didn't really do anything special. I opened up the little hatch, dropped down, and the guy had his monologue before running into the room where the boss fight takes place. I know escape works in the previous area because that's the maze where hitting escape takes you back to the beginning and that's fine. As soon as I leave the maze, escape no longer works.

and the sound effects pressed my funny button...

This was a fun 3 hour binge. Died once to the second boss but reasonably smooth sailing past that. I have no idea what any status condition did but the Bonk skill made the second-to-last boss a cakewalk so I'm guessing it was good to keep them away. orange's sprite getting all excited for his turn is pure art

Thank you! I've been trying to get better at my combat design...

I had plenty of fun rolling through without picking up on it, although I did use Divine Touch and Suplex all over the place - all I really needed to know was that it kept their Numbers lower and/or made mine bigger. I don't use RPG Maker and haven't played more than a handful of RPG Maker games so I figured that's where the knowledge gap was. This wasn't the most ~~~strategic~~~ combat system ever but it being weird and a little messy worked well with the vibe of the rest of the game and that counts for more imo

RPG for ballers/shot callers. Great music and sprite work, punchy dialogue with a tight flow to it. More tonally diverse than I was expecting, too. Great work!

So, in the end who tf was Sali?

Had a fun time with this silly little game! The writing was a highlight for sure, as was the sick soundtrack! I was wondering, are there multiple endings? It seems like there could be, but I'm not 100% sure...

i cannot save while playing your game, i keep getting an error sound

You can only save in wifi enabled locations with the palmtop

Yo I can't wait to play this game, you worked real hard on it.

I didn't know 50% off meant FREE. Quite strange.

I decided to make it wholly free soon after making it on sale, and I can't figure out how to turn off the sale early!

really wonderful game! if u like cool tunes and buff goons this game is for you

This FRPG (fun role playing game) felt lightning fast, like drinking six cans of Coke at 2 AM, cranking the speakers higher and higher, and the night outside becomes outer space

A mechanically simple RPG with entertaining story and dialogue. I got to the engineering boss and died but intend to finish the game.

Great sound track and pixel art. Overall a good game that doesn't take itself too seriously.

Some issues that I noticed while playing:

- After combat, enemy names are not stated in the defeated text

- After combat, character and item names have their first letters cut off (range instead of Orange)

- In some areas, there are invisible walls that block walkable spaces 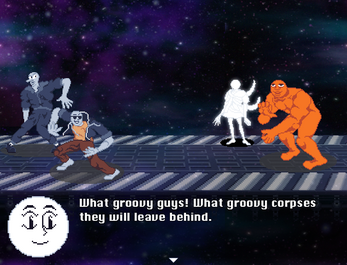 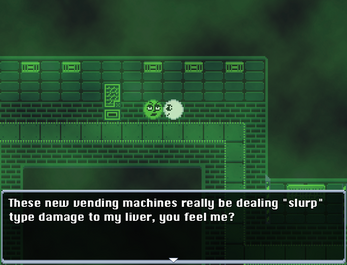 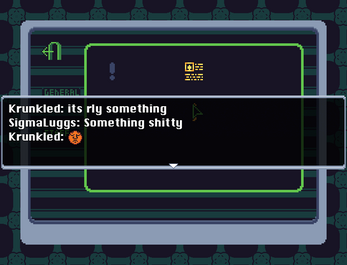 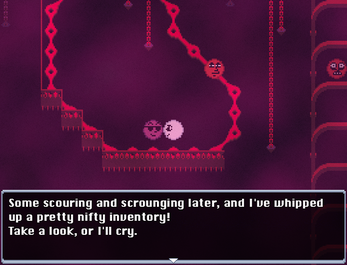